Cockatiels are a well known and much loved pet to many Western households, however this little bird actually comes from Australia. It can be found there with the rest of its family, the parrots. Its name is actually derived from the dutch term for "little cockatoo", it's closest family member.

Cockatiels, although native to Australia, have now been adopted by many people across the globe as "exotic" pets. Since Australia now have banned the exportation of native wildlife, endangered or not, all of the cockatiels in America's homes are likely to be bread in captivity.

Cockatiels can be distinguished by several features. The most prominent of these is it's "crest", the group of feathers on the top of its head which sets the cockatiel apart from most animals completely. This crest is thought to be used in both the process of attracting a mate and in the art of defense. Either way, the cockatiel's crest is still a very unique and prominent feature, and is the reason why so many people love to look at them and keep them as pets.

Another feature that most cockatiels possess is the color of their facial feathers. Like their brightly colored parrot brothers, the most common cockatiels have bright yellow facial feathers with a circular orange group of feathers on their cheeks. This is one of the most distinguishable feature that a cockatiel has and is what most people recognize them for.

Cockatiels can live for up to and even over 20 years, with some recording life spans of 30 years!! For such a small animal, this is a profoundly long life span, and has added to their appeal and popularity as pets even further.

Cockatiels are pretty intelligent, too - and have been known to mimic other animals, sounds and even people, spitting out a high-pitched, soft voice of what they are trying to repeat. They are also intelligent enough to realize who their owners are, and almost always form very strong bonds with their owners. This can be shown by the cockatiels calling out for their owners - especially if the owners are not around the bird.

The official scientific name for the cockatiel is Nymphicus hollandicus. Early travellers from Europe adored cockatiels so much that they gave them the nickname 'little nymphs' after the famous mythical creature. The 'hollandicus' part of their name is likely to come from an early name for Australia which was New Holland.

Up until the 1960's cockatiels were caught in the wild, imported from Australia and then bred. They breed easily in captivity and so captive cockatiels caught on around the world quite quickly. They've become very popular pets since.

There's been a lot of thought over the years as to which type of parrot-like bird the cockatiel is most closely related to. The yellow-tailed black cockatoo (the size of a crow) is perhaps the cockatiels closest relative. 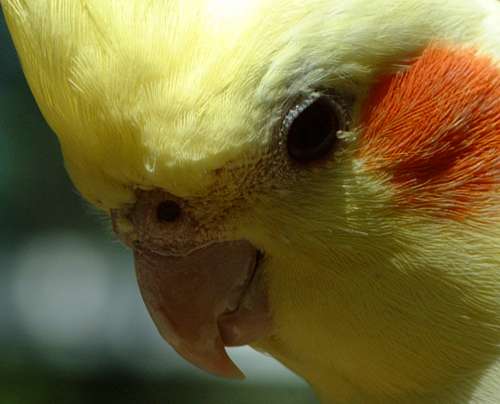